The year 2000 has indicated that most of the Asian economies affected by the regional economic crisis in 1997 has further recovered. 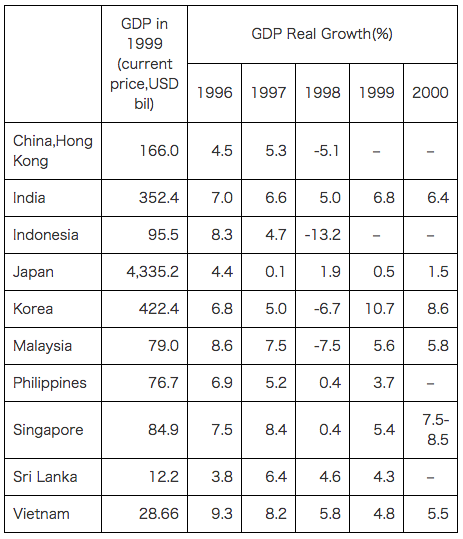 2.The Construction lndustry in AsiaConstruct Countries 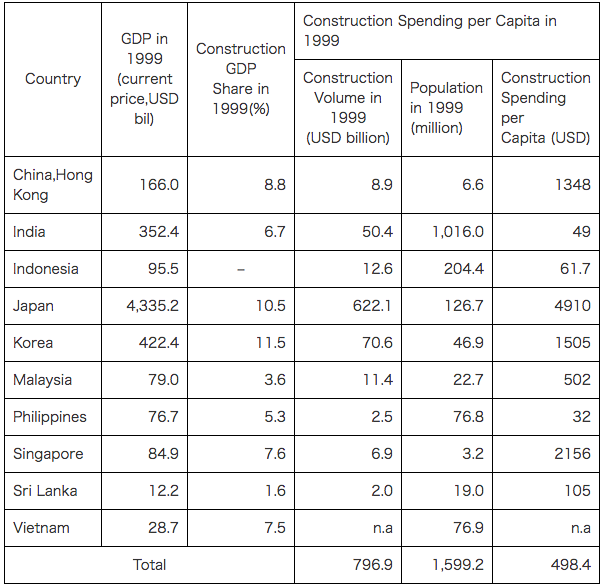 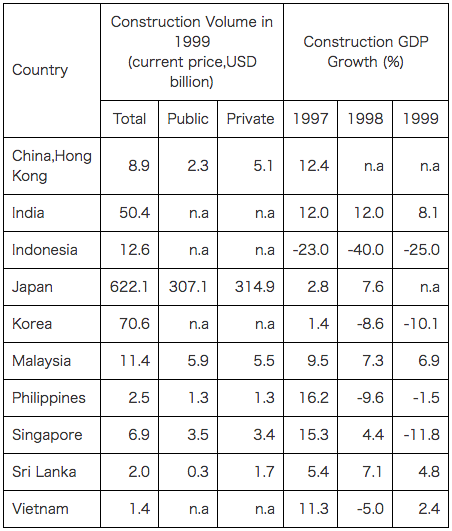 The outlook in the construction sector in Hong Kong is impressive . Massive infrastructure and building projects have been planned and construction tenders will be invited Shortly. Examples include works arising from the Railway Development Strategy, the redevelopment of the Kai Tak Airport and its adjacent areas, the Construction of the Cyberport,and the Construction of the Disneyland Theme Park development . In the building sector, the public housing programme will be providing more than 90,000 units, the largest annual production ever . In the private sector, the Property market is expected to recover in tandem with the general economy recovers . Opportunities for builders in the coming year look much better than 2000 . Building and civil engineering construction in both public and private sectors will remain active in he next few years, if not more so.

Due to a very large and self sustaining domestic market , and fairly robust economy,Indian Construction Industry did not face much extreme impacts from the economic crisis . India continues to rapidly devdop its infrastructure . By current estimates, inclusive of the investment backlog in areas Iike urban services, the investment needed in the infrastructure sector over the next decade to support an annual GDP growth rate in the range of 7 to 8 per cent is around INR 15,000 billion (US$ 429 billion).

The long-term dimension of this massive investment programme deserves special mention as do also the robust growth potential demonstrated by several infrastructure sectors . Power generation, for instance, hasi increased annuaIly at the rate of 7 to 8 per cent both over the very long term and the first four years of the reform phase . Electricity consumption per capita is however less than one-tenth the global average . Basic telephone connections have grown annually at 10 to 22 per cent over the last decade; but penetration ratio is still low at 1.5 per 100 population as compared to the global average of 10 per hundred. The need to accelerate infrastructure development therefore presents enormous opportunities for the investor.

The government of Indonesia is also taking steps towards decentralization with the implementation of Law no. 22/99 on regional autonomy and no 25/99 on Central and local government budget/revenues . With this, most of the works will be managed by the regional manager . AIthough the government has no clear and agreed strategy and implementation plan for decentralization, many of the regions appear ready for more autonomy, and show a fairly practical attitude towards issues such as local reorganization and the absorption of central government personnel . The tansition period of decentralization, which will take about 3 to 5 years to complete, is expected to strengthen the local construction industry further.

With.the beginning of the regional economic crisis, the japanese economy experienced a tremendous negative impact due to its close ties with Asia, and this was one of the contributing factors to Japan’s descent into a severe recession in 1997 . To stimulate the economy, the government has increased investment in public construction , This is because public works projects were actively promoted in the successive economic policies enacted to achieve economic recovery.

Construction investment is now in a phase of short-term contraction . Private investment is expected to be stimulated as economic recovery progresses, but massive improvements cannot be anticipated even over the medium to long term due to the negative effects of fiscal beit-tightening, the aging of the population, and population decrease . The recovery of the Asian economies is to result in a gradual recovery of construction orders received by Japanese construction companies in Asia.

Korea has had a remarkable economic recovery . GDP growth recorded 10.7% last year, 1999 and is expected to be around 7.5% this year . Other major macroeconomic indicators show equally favorable developments, including a historicaIly low inflation rate of 0.8% last year and 2.2% during the first eight months of this year . There is an improvement in the performance of the construction sector in 1999 due to the economic recovery action plan implemented by the Government . From 1999, construction market shows signs of slowly recovering . Construction investment growth rate recorded 0.9% last year and a further 3.9% growth rate is expected this year.

The first two quarters of 2000 have shown growth of 1.2% and 2.1% respectively . In 1999, the construction volume increased by 44.1% in vaIume compared to the previous year . If the Malaysian economy continues to expand and further recover from the past crisis, the construction market is expected to follow suit . Recent policy initiatives by the government regarding the financial system and banking structure wiii help make the country and its economy more resilient to outside shock . While construction industry may not reach its pre-crisis boom in the near future, a steady improvement throughout the sector could be expected as the demand picks up . With the onset of globalization, the national constmction sector has to prepare to become more resilient and competitive in the face of greater challenges expected from a more open market from a world-class competitor.

The attainment of positive growth in the country’s macroeconomic indicators in 1999 and the first six months of this year (in Iess than two years’ time from the Asian financial crisis) affirms the resiliency and stability of the Philippine economy . The achievement has also brought renewed optimism that the targets set for the economy will raise overall growth to pre-crisis levels . Although investments and the construction market are still down, the outlook in the near future is bright . Private sector demand for construction is perking up and Government infrastructure development plans are expected to push through especiaIly in the countryside . The bulk of public sector demand will come from transportation and energy projects under ne Government’s Public Infrastructure Program; low cost housing under the National Shelter Program; social infrastructure; and local government projects . Private sector participation in these projects wiII continue to be encouraged under the Build-Operate-and- Transfer (BOT) schemes . Private demand for residential and non-residential construction is expected to rise in the growth areas outside of Metro Manila.

Construction demand is anticipated to recover in tandem with improving economic climate, albeit with a time lag of one year . Preliminary estimates from BCA suggest a rosier picture for the local construction industry with the demand expected to pick up gradually in the next few years . The recovery will be Ied by strong government spending with emphasis on infrastructure construction . On the other hand, developers from the private sector are expected to tread cautiously in response to various property market situations.

In the longer term, outlook for construction remains bright . With the proposal to plan for a larger population of 5.5 million, the Singapore construction industry can Iook forward to a total of S$200 billion worth of projects over the next 20 to 30 years . Future buildings will be more environmentally friendly, fitted with intelligent & energy efficient features and electronicaIIy connected . To meet the need of housing a larger population, residential buildings are going to be taller.

Major civil engineering projects include expansion of the surface road networks and another 450km long of MRT/LRT lines will continue to put in place an ambitious rail system network to meet the rising transport needs in the future . There will be more process engineering buildings such as waste water treatment pIants and bio-engineering plants . Underground construction to free up land for other uses will be promoted . Projects in the pipeline include Common Services Tunnel and South Tunnel of the Deep Tunnel Sewerage System.

Despite economic difficulties, the national reconstruction program is still underway in order to overcome the backward infrastructure, and as a part of construction demand-stimulus policy . To overcome these economic slow down, maior Strategies in the construction sector are to improve the funding, operation management and to diversify activities . While Vietnam is aware of the need for self-support, on the one hand, it is keen on development of international cooperation for mutual interests . The national development requires the construction industry to develop faster providing a prospective for more foreign participation.